Besides knowing how to handle firearms safely, the most important part of gun ownership is storing your weapons responsibly. Without using a properly-equipped gun safe, you’re putting yourself and others at risk. That’s true regardless of whether you have kids or not.

Here, we’ve rounded up our three favorite gun safes on the market right now. They’re all the sturdiest, safest, and most user-friendly in their category.

Reviews of the Best Guns Safes of 2020 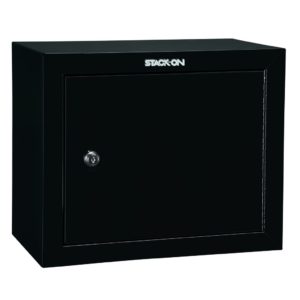 Stack-On’s GCB-900 is our recommendation to anyone who wants a secure, convenient place to store pistols. You can certainly keep pistols in a large cabinet with your rifles, but some people like to have a dedicated storage solution for each. This is the way to go, if that’s what you’re after!

It’s compact, at just 21″W X 10″D X 18”H. This is a great solution for people who want safe storage without taking up lots of space. It gives you secure storage for pistols while being so small that you could fit it right inside most large cabinets!

Despite being small, it offers lots of storage potential! There are two internal shelves inside, plus a cushioned bottom compartment for any heirloom pieces. We’d say you can get about 2-3 pistols per shelf. That ought to be more than enough for most handgun collections, even with ammo included!

It’s solidly built. You can tell right away, given the 25 pounds it weighs! That’s thanks to all-steel construction right down to the steel piano hinge.

It’s as secure as you’d expect from Stack-On, too. The locking mechanism goes all the way through the steel door, and is secured on the inside of the cabinet. This is a key-coded, three-point, double-bitted lock paired with a steel locking plate behind the door. Nobody who doesn’t have a crowbar and time on their hands is getting into here! It’s by far the most secure compact safe out there.

Like all Stack-On products, you can fix several of these together, either stacked or side by side. It comes with mounting hardware to attach to another cabinet. You can use the same hardware to mount it to the wall, floor or ceiling.

It’s covered by a 1-year warranty.

The shelves are very sturdy, but if you fill them completely with ammo, they could flex. We simply suggest using the bottom compartment for ammo.

Unlike most full-size cabinet safes, it’s not waterproof or fireproof.

The shelves don’t have padding. The bottom compartment does, though.

This is very secure for what it is, but it’s not the same as having a full-size cabinet. While it would be difficult, a determined thief with a crowbar could pry it loose from the mounts.

Obviously, you can’t keep rifles in something this small. 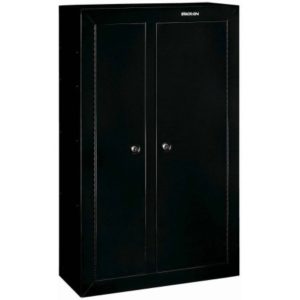 This Stack-On cabinet is an affordable, secure solution for keeping smaller rifle collections. You can get up to 10 guns in here. They’ll be safe behind the same 3-point locking system as the small pistol cabinet above, and a big, beefy steel door with key reinforcements.

For something fairly inexpensive, it’s well-appointed. The bottom is padded to keep your firearms safe from scratches or scuffs, and there are barrel rests and standoffs inside to suit scoped rifles. They’re molded from sturdy material under the foam padding, so they won’t compress or deteriorate with extended use

It’s versatile. You can arrange the shelves and remove them however you need to. Thanks to the contouring, you can fit both rifles and side-by-side shotguns in here.

It has 4 removable shelves, all padded to protect your pistols or valuables. We particularly like that they’re made from steel, so they can handle ammo with no problems. That’s by no means a given at this price.

In terms of both locking mechanism and construction quality, this is basically a scaled-up version of the Stack-On pistol cabinet above. This full-size model has all steel construction, including a steel welded and staked piano hinge. It uses the same locking mechanism as the smaller Stack-On above: a three-point setup with a key-coded, double-bitted lock.

This one’s more heavy-duty, though. Not only does it have the advantage of size and weight, but the steel locking plate on this one passes into the cabinet frame at the top and bottom.

It meets the California Dept. of Justice’s stringent requirements for safe gun storage. Not only does that make it among the few options available to gun-owning Californians, but it indicates a superb level of security to gun owners anywhere.

You can mount this Stack-On flush against your floor or wall, or both. Hardware is included, as with the smaller model. There are also pre-drilled holes in the top for adding a small pistol cabinet to your armory. You can bolt one of the smaller Stack-On’s right on top!

It’s made in the USA and backed by a 1-year warranty.

Fit and finish are better on a premium model like the Steelwater below. This one’s fairly cheap, with plastic and foam instead of upholstery. In general, while this is sturdy enough, it does feel cheaper compared to a Steelwater.

It’s not fireproof or waterproof, either. If those are features you’re looking for, spend more for the Steelwater.

The Stack-On is also bare-bones compared to the pricier options. It’s easy enough to kit out if you want, but there’s no built-in lighting and the lock is just a key mechanism, with no biometrics or key pad. 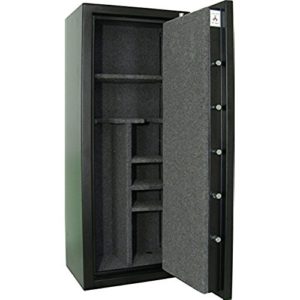 This “new and improved” Steelwater is the latest version of our favorite gun safe–ever! It’s big, rugged, and deluxe in every way. It has the convenience of a digital keypad, but is built as heavy as any all-manual locker. There’s an upholstered interior, built-in lighting, and all the security features you could want. Buy this if you have a big collection and want the ultimate in protection for it.

As far as safes go, this is one of the most industrial. There are certainly heavier-duty options, but we don’t think there’s any practical advantage for the home gun owner. This is as protective as you could possibly need! Nearly 400 pounds of protection is included here, and it shows. This thing is made from 14-gauge steel, with a massive 5” thick door.

In every respect, it’s rugged and secure. This thing has 10x 1.5” locking bolts, made from solid steel. They go into the frame of the cabinet on all sides, so the whole thing is an impenetrable block when it’s closed. The Steelwater uses a 3-way direct-drive lock and bolt system, like the Stack-On’s. It’s protected by a drill and bullet-resistant plate.

There’s also a backup lock activated by spring. If the original lock is punched out or removed during an attempted burglary, the safe will lock itself back up to prevent intruders from getting any further. This is a really great feature that gives you even more peace of mind!

Unlike the key-only Stack-On models above, the Steelwater has a digital keypad for convenience. It’s EMP-proof and balances convenience and security as well as anything else we’ve found on the market. And keypad systems like this are less finicky than biometrics (which we love in theory, but not so much in practice so far!).

There’s also a double-bitted bypass key, in case you forget your combination. You can get extras when you order, but once you’ve bought the safe, you can rest easy in the knowledge that nobody (not even you!) can get another of that key made.

You’re protected in case of a fire. That’s a key upgrade over the Stack-On! The door seal expands 8x its original thickness with high heat to form a water and fire-proof barrier. It’s fireproof for up to an hour.

It’s very roomy. The “average” capacity is listed as 12-16 long guns, which we’d say is pretty accurate. That’s figuring in room for ammo and accessories. You can technically get 20 max, but that’s pushing it. You wouldn’t be able to have any ammo or other stuff in there, and it wouldn’t be very practical to access weapons.

You can adjust things however you like. There are 4 shelves that can be repositioned or removed as needed.

It’s carpeted on the inside. The upholstery gives you lots of protection from scuffs and scratches, and feels much more deluxe than the cheap foam on the Stack-On.

There’s also built-in lighting, which is a really nice upgrade over cheaper models. It uses efficient LED bulbs that will probably never need to be replaced. We also love that the lighting turns on and off with the door being opened/closed. It’s convenient and well-executed!

This model includes a door organizer for smaller accessories.

It’s also pre-drilled through the steel at the back, so you can easily add a dehumidifier. Or, you can contact the manufacturer to arrange to buy one with a preinstalled dehumidifier.

It’s covered for lifetime protection against burglary and fire damage, plus a 1-year warranty for manufacturer defects

It’s big and heavy. This is something you’d need 4 people to move, minimum. You’ll also need a decent amount of space to devote to it.

It’s expensive. This is more than twice the price of the Stack-On.

This isn’t technically the most heavy-duty thing on the market, as we’ve said. Steelwater makes a “heavy-duty” version with a much larger steel plate over the lock and several other upgrades. Honestly, we think it’s overkill. Save some money and get this one! But if you’re one of those people who wants the best of the best regardless of price, you can check it out here.

We hope you’ve found this guide helpful and informative! If you like the looks of any of the safes we’ve recommended, click on the links in the review to find out more. Or, head over to our homepage to find more in-depth reviews and recommendations for the best gun scopes!